Photo by Markus Spiske on Unsplash

Subscribe to my newsletter and never miss my upcoming articles

Working on a large software project can often be a challenging yet rewarding experience. As a developer, you write code to solve problems.

However, you’ll have to write secure, bug-free code, and follow best coding practices while complying with standards. And this can be super difficult when you’re working under pressure.

This is where Static Code Analysis can come in handy.

By the end of this post, you’ll have learned enough to answer the following questions:

What is static code analysis?

So how exactly does static analysis work under the hood?

Well, static analysis often involves parsing of the source code into an intermediary representation on which you can run analysis. This analysis then returns potential security issues, bugs, and performance issues in your code—which you can fix almost immediately.

Now that you know what static analysis is, you’ll learn how it can help you write better code in the next section.

Why should you care about static analysis as a developer?

As a developer, static analysis helps you in every step of the development process. You can:

And it’s a lot easier to fix bugs as and when they arise rather than having to regress and do it much later.

Unlike the conventional testing process, where you need a specific module to be all ready to go, static analysis only requires a chunk of code that can be modeled.

The term ‘modeled’ here means that the code can be parsed into that intermediary representation on which the analyzer can be run. Please note that your code is never actually run in the process.

This intermediary representation is often the Abstract Syntax Tree (AST).

Because of how static analysis can be integrated into development right from the beginning, you can run analysis at every step and make sure your code meets the standards.

This ensures that your code is almost bug-free when the actual testing process begins.

So far, you’ve learned how you can benefit from static analysis as a developer. Let’s put together the advantages in the next section. 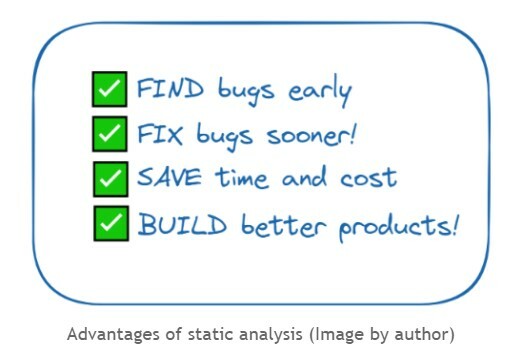 Well, are there any caveats yet? Let’s summarize the limitations of static analysis in the next section.

Hope this post helped you get a high-level overview of static analysis, its advantages and limitations. See you all soon in another post!